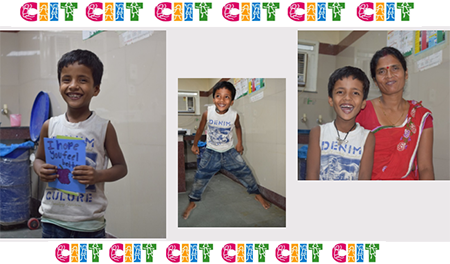 Rishab is a sweet and young boy was brought in the Safdarjung clinic back when he was 1 year old. Back then when his parents lost all hope,our counsellors could see that mighty god himself had branched out into all that he did at play. The feet that were twisted, were meant to run and fly.
Only wrapped in a shawl around his naked body and with his bare twisted feet, the counsellors were there to guide and comfort the parents. This poor family had been knocking on the doors of all clinics from Bihar and the CURE clinic in New Delhi was their last hope. The parents were naturally worried and disheartened to see their boy in that state.
After a few months there was a significant change in the legs of Rishab. His warm eyes always charmed the doctors also, when they would see him coming from the doors of the clinic. He was a favourite in the clinic. That is how Rishab is. Even when he didn’t start talking he could bring smiles to all the faces near him.
Now rishab 6 years old completed his treatment and out there enjoying the world. He is the fastest boy in his class as we were told. Running in the streets, opening his arms wide and embracing the wind that tosses his locks of his raven hair backwards, little Rishab seems to be happy all the time.
CURE clinics all over India are trying to give hope and faith to children that they have the ability to fly high in the sky and spread their wings just like they helped the poor boy Rishab.

You have Successfully Subscribed!

CIIT is a nonprofit national Health Care NGO that serves India with a vision to eradicate disability caused by Clubfoot..

Join our Cause, Stay updated !

Thank You For Subscribing Our Newsletter!